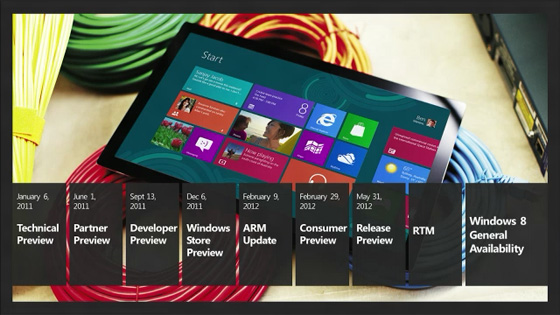 In the course of the Worldwide Partner Conference (July 8-12, 2012) Microsoft presented this schedule. It seems to include a few odd milestones, but actually all of them were presented to the public in the past. Below is a table which lists each milestone plus corresponding build number and the place of presentation.

According to Paul Thurrott, Microsoft released 8 Developer Preview versions to its testers since September 2011.

Microsoft released 8 developer preview versions of Windows 8 since last year. Three of these are the known public releases [Developer Preview, Consumer Preview, Release Preview], and five were secret releases given only to “a limited developer audience.”

All of these Windows 8 releases — public and secret — included new APIs and system capabilities, updated developer tools, better performance and reliability, and responses to developer feedback.

The first Windows 8 developer preview was released at BUILD in September 2011.

Developer Preview 4 and 5 were released in February 2012. (The Consumer Preview was DP5.)

(Microsoft doesn’t mention that Developer Preview 8 was just released, and dated from last Friday [June 29, 2012], or that the post-milestone DP releases actually have names like Windows 8 Release Preview Update.)